Forms of Presentation and the Future of Comprehension

Displacement of the wood by the trees

The small black patterns in the design below are included to indicate graphically a currently prevalent conceptual trend. The page constitutes a Gestalt puzzle and does have a very clear significance which once seen is obvious. The disordered impression is then permanently lost (see last paragraph for the key). Each black pattern may however be considered as representing the field of interest, concern or activity of some body or group in society. Thus. for example:

Each believes that the hope for a stable, peaceful and fulfilling world society lies in greater emphasis on those particular aspects of society of which he or she happens to he currently aware "- just as in examining the black patterns opposite we attempt to fit them together by a detailed scrutiny of their structure. It is in this way that we expect to arrive at a more comprehensive and balanced understanding.

And yet the key to a comprehensive view is not necessarily via the greater elaboration of detail. There are other ways of looking at a maze of isolated patterns which can bring them together into a meaningful whole. The possibility of a "conceptual ecology" and an "organizational ecology" may be important in this respect.

Such a meaningful synthesis is required in many areas, for example: the need for multidisciplinary thinking to guide the long-term development of society, the need for co-ordination between different kinds of organizations concerned with related problems, and perhaps most important, the need for a fulfilling, balanced environment in which human beings can develop towards maturity. The key to the pattern opposite is obtained by looking at the network of white patterns which form letters of the alphabet linking the black patterns into lines of text(seen horizontally)thus creating a meaningful whole. The lack of education in the ability to make this type of conceptual switch of perspective in other contexts severely impedes progress towards wide recognition of world society as a meaningful organic reality. The prime concern of the Union of International Associations is with new methods of facilitating such a switch. 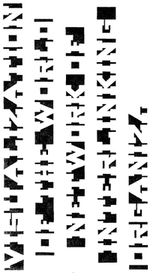