The term "network" is encountered more and more frequently in the social sciences, in administrative documents and in public debate as reflected in the news media. In each case use of the term seems to be associated with new perceptions of the complex and subtle patterns of relationships between social structures characteristic of society today.

It becomes increasingly clear thatsocial scientists and practitioners are seeking a new vocabulary, one that would provide a means for objectifying and de-mystifying the complexity of the organizational, problem, and other net-works by which we are surrounded and within which our activity is embedded.At present, because clear and unambiguous concepts for discussion of social complexity are lacking or have very limited currency, communication can only be achieved with the aid of extremely cumbersome and lengthy phrases which tend to create more confusion than they eliminate. In the absence of adequate terms to handle urgent but complex realities, debate tends to concentrate on issues which can be adequately expressed via the traditional vocabularies. The same issues recur, maintaining a high level of visibility and an assumed legitimacy due to the relative ease with which they can be stated, rather than to their importance.

While the term "network" may be currently doing some service to contain the complexity with which social scientists and practitioners are con-fronted, there is a strong possibility that both groups could benefit from each others insights and from exposure to the more sophisticated forms of re-presentation already developed by the small group of mathematicians concerned with networks (e.g. in the case of topology, graph theory and related disciplines).

(N.B. it is recognized that there is already a considerable literature on "Social networks" (1). However, the sociologists having this preoccupation are almost entirely concerned with net-works of individuals, usually perceived as centred on one key individual. So although extensive use has been made of graph theory and sociometric techniques, this does not appear to have been made relevant either to networks of groups and organizations, or to the broader concept of "network" and • networking • now being used by social activists. Furthermore, those working on "social networks" do not appear to be interested In such applications).

It is proposed that exploratory encounters be organized between the following groups:

Report of a preliminary meeting

The feasibility of the proposed encounter was tested and examined at a preliminary meeting organized by the Science and Human Affairs Program-me, Concordia University (Montreal,18-20 November 1976) (3).The justification for the meeting was developed by Dr. J.W. O'Brien, Rector and Vice-Chancellor of the University,by J.C. Callaghan, Dean of Engineering,and by Dr. D, Charlton, Director of the Centre for Interdisciplinary Studies during the opening session.There were 56 participants, of whom 27 were from universities, and the remainder from a variety of govern-mental, nongovernmental and social activist organizations.

The following international bodies formally associated themselves with the initiative

It was announced that a similar exploratory encounter was to be held in Paris in March 1977 on the initiative of the International Foundation for Social Innovation to examine the questions in a European context in the light of the Montreal initiative (2). Due to the experimental nature of the meeting, and the deliberate diversity of participants the coordinators of the meeting refrained from predetermining the programme's expected products(particularly since the subject matter and the predisposition of participants rendered questionable any such initiative). The documents distributed to participants suggested topics for discussion, objectives and possible products.

The first day of the meeting was devoted to plenary sessions in which the topic, group processes and options were clarified. During these sessions discussion was interspersed with informal presentations from a number of individuals who thus helped

On the second day three groups met in parallel:

(3) The meeting was convened by Professor Christian de Laet, currently Science Advisor to the Commonwealth Secretariat,

In its first session the group continued the process initiated in the plenary session whereby participants were exposed to the particular concepts of networks used or applied in electrical engineering, control engineering, and ecology. During this process, members collectively attempted to determine how relevant such insights could be to ordering their own insights into the social networks with which they were familiar.

Although some of the distributed documents identified a number of network-related concepts, the group did not consider it appropriate to use its time to focus directly on any form of terminological standardization. The discussions were in fact revealing in that they brought out the conceptual richness which could be usefully explored during such group processes and the value of the discussion process itself for clarifying understanding about different kinds of non-technological networks. During its second session the group decided to concentrate its discussion on the distinction, if any, associated with current usage of « network » and « system ». This was considered particularly important in order to meet any charge that use of • network » corresponded to a current fad rather than to any fundamental distinction. The discussion moderated by Professor Fiksel was extremely lively and examined a wide variety of possible distinctions (see report : : pages 360-364. Although there was a fair degree of consensus on the value of some of these distinctions,participants considered it premature to arrive at any final distinction. In fact, it was the discussion process itself which,as before, proved to be of most value— namely the effect of explaining different aspects of possible distinctions and their implications for non-technological networks.

The group tentatively agreed that any efforts to pull together collections of network-related concepts could best be done through background reports but that the process of « concept clarification » could better be concerned with the exploration of different concepts of networks (from different disciplines) rather than with an immediate and somewhat artificial attempt at developing a standardized terminology.

The group was primarily composed of people working in or with social change networks. Participants first engaged in a brainstorming session to share their perceptions of networks and « networking ».

This procedure was then followed by presentation from each of the participants concerning the networks with which they were working in an effort to determine what techniques were used and the extent to which each participant could learn from the others.(An extract from the group report will be given in a future issue).

This group was primarily composed of participants with some direct involvement with education or audio-visual media. It first examined the manner in which network organization was inherent in some aspects of education and communication and the desirability of greater use of network organization in place of other approaches.The second concern was with the manner in which an understanding of net-works could be conveyed in audio-visual materials and of how an appropriate environment could be created for the proposed future meetings in order to facilitate understanding of networks and network formation.

It was agreed at the plenary session that a report should be prepared clarifying the options for future meetings in the light of the discussion of this matter. These options are identified in the following Sections.

(2)Some of the papers for the group on « Complexity » have been printed in past issues of Transnational Associations (1977: 4, 5 and 7-8). The summary of the discussion is reproduced in this issue pages 341-364).
Other papers are available from the secretariat of the Foundation, 20 rue Laffitte, 75009 Paris.

Options for the proposed meetings

The preliminary meeting, after considerable discussion, concluded that it was undesirable to fix precise objectives for any proposed meeting as a whole, but rather to create a facilitative environment within which a number of activities could take place, each with more precisely defined objectives.It was felt that this approach was consistent with the common concerns of participants and the shared understanding of the network alternative, whereas overall objectives would tend to alienate some potential participants.The activities or programme events for which precise objectives would be defined could therefore be :

The objectives of any specific activity might therefore be any combination of the following :

It was agreed that the number of people participating in any particular activity dependent on group dynamics should not exceed 40 - 60. However, the number of such activities need only be limited by:

It was agreed that

A number of specific activities, or programme events, were identified in a background document (see box A).

The main purpose of such meetings is to explore the possibility of obtaining useful products from further work in this area. Such meetings could however give rise to the following products to serve as a benchmark for any further explorations (whether on the part of the amateur conceptualizer or the hardcase practitioner):

A possible programme outline
Box A 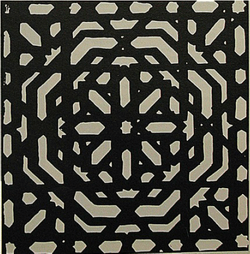 Indicative listing of types of networks

There are numerous uses of the term "network" to describe features of the psychosocial system. However, although these call attention to the complexity of the social system,they denote a static structure and contain no reference to the essential dynamism of networks. Networks are dynamic both in terms of the flows between the nodes but also because of the evolution of the network itself over time in response to new challenges and opportunities. This dynamic feature could well be highlighted by using • network » as a verb as well as a noun. • Networking » becomes therefore the process of operating in an (inter-organizational) network, including the progressive evolution of this network over time (1). In the following section an attempt is made to list together a variety of social networks to give some idea of the areas in which the concept can be used.

The following networks may be perceived in different ways, such as: 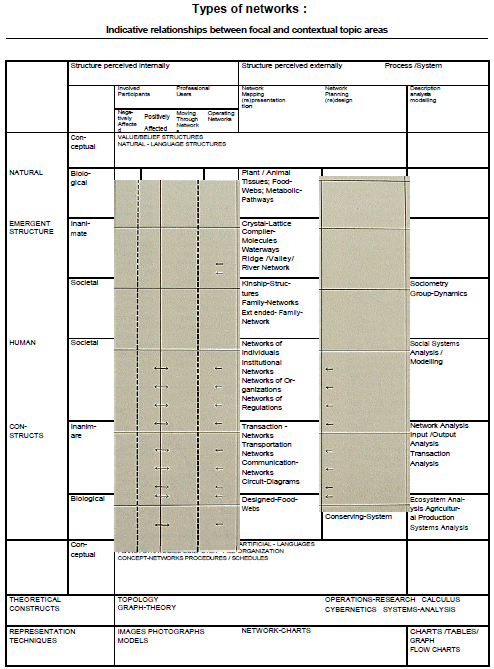