In recent issues of Transnational Associations reports have been published on " complexity "as a constraint on social innovation. Those articles sho­wed how the complexity of world pro­blems was not matched and contained by an appropriate network of concepts, information systems and organizations. And, perhaps even more seriously, it was pointed out that our antiquated approach to organizing meetings seems to obstruct any efforts to focus effecti­vely on complex issues without dange­rously over-simplifying them, alienating potential collaborators, or inhibiting our ability to act.

The same issues of Transnational Associations have also contained articles on the emerging use of organizational networks and their significance as a response to our complex rapidly evol­ving social environment. However, as with conventional organizations, the activities of such networks are, for the most part, currently governed by the communication costs, rates and delays associated with document production, the intercontinental postal service and occasional use of the telephone and telex.

In this issue of Transnational Associations, we have gathered together a number of articles to explain how a new and little known technique -- computer conferencing -- is likely in the im­mediate future to change radically the way that people can meet and work through national and international groups. It is a technique which provides direct support to organizational net­working -- possibly of as yet unfore­seen kinds -- and without necessarily requiring and reinforcing some of the antiquated structural features which we seem to be currently obliged to build into our organizations for legal, admi­nistrative, political or prestige purposes.

It cannot be stressed too strongly that those familiar with this technique con­sider it to be a breakthrough in person-to-person communication of as much social significance as was the telephone. This is best illustrated by the fact that it can facilitate (possibly anonymous) contact between people or groups on the basis of common interests or pro­jects but without requiring prior know­ledge of the identities of those who can usefully be contacted. (The table on p. 403 may help to explain how com­puter conferencing differs from more familiar forms of communication). Al­though the technique is relatively easy to describe, it is however quite diffi­cult to understand the radical nature of its implications :

" Most of our intuitions about face-to-face interaction do not apply to this new and unusual form of communica­tion. In computer conferencing, time and distance are dissolved... Each per­son's " memory > of what has been said is accurate and complete. And everyone may " speak "at once or * lis­ten "at leisure. With such features... entirely new patterns of interaction emerge ". (J. Vallee et al. The Computer Con­ference : an Altered State of Communi­cation ? The Futurist, 9, 3 June 1975, pp. 116-121).

It should be stressed that such patterns can be significant in terms of clarifying action decisions between many bodies as is illustrated by the fact that the first computer conferencing system was developed for the U.S. Office of Emergency Preparedness. It should also be stressed that such patterns of interaction blur the distinctions between a meeting and an organization and the roles and activities normally associated with each. The need for the physical presence of people, files and records at a particular location may rarely be necessary. The internal rules governing any computerbased organizations may simply by-pass current legislative provisions and rigidities concerning " statutes ".

Those who doubt the future relevance of such a technique to their own activi­ties should reflect on how the opera­tions of their organizations are limited by dependence on telephone /post /tra­vel, on how quickly low-cosl " pocket computers "have become common in office and home, on the sophisticated games that can now be plugged into a television set in the home or a café, and on the forecast that computer ter­minals will soon be as cheap as colour TV sets. Those who perceive the tech­nique as irrelevant to their relations with developing countries should con­sider the current world-wide develop­ment in data networks and satellite communications and their own problems of communication with such countries.

A number of international associations have used the technique for their own programmes (see page 446) as has the Kettering Foundation which is investiga­ting its use. Several articles included here report on the active support being given by the U.S. National Science Foun­dation to groups of scholars wanting to keep in computer-based liaison. Al­ready groups of scholars concerned with specialized areas are making use of this technique as a substitute for their normal communications (and for the professional organization ?). Soon an individual will be faced with the question of whether he or she can af­ford not to link into the special interest network(s) of those with whom he or she normally interacts -- where cost is a factor, for many the choice be­tween a TV and a computer terminal will not be difficult, particularly since the latter is a guarantee of non-direc­tive interaction rather than program­med passivity. Groups, associations and institutions will be faced with the same question -- with the flexibility and rapidity of computer conferencing con­trasting as sharply with the uncertaini-ties and rigidities ofcurrent postal and telephone communications as did the telephone with the messenger and pi­geon post services in the past.

There appear to be three different . styles - of computer conferencing (aside from the distinctions made in the article by Jacques Vallée) :

(a) Of­fering the conferees every conceivable automated means of conferring and in­teracting and using the computer to pre­vent them from being overwhelmed (This is the approach of the new E1ES system);

(b) Restructuring the con­ference to include low-key computer communications and guiding the mo­derator with analytical feedback to fa­cilitate-the exercise of any necessary leadership to ensure participation (This is the approach of the PLANET system);

(c) Determining the basic concepts about which information will be ex­changed during the conference and using participant computer input to re­fine the interrelationships between the concepts as a guide to determining with whom it would be most fruitful for each to interact (This is the "Conference Facilitation" approach).

The articles printed here stress the im­portance of the technique for maintain­ing links between a relatively stable network of people dispersed over a large geographical area. Most of them neglect its potential impact on a large conference where people have difficul­ty in making significant contacts to be­nefit from the presence of unforeseen groupings of people who share a con­cern that none of them had necessarily expected to be expressed on that oc­casion. The technique can facilitate the emergence of such groupings or coali­tions within a relatively unstable and rapidly changing network of people and issues, whether present at a conference or linked to it from distant locations. It offers considerable advantages as a means of facilitating communication in a multilingual environment (with no li­mit on the number of languages) since any message can be passed via the appropriate translator(s). And it is an ideal technique for facilitating the trans­formation from plenary session confi­gurations into a multitude of small groups and back again -- particularly when the number, concerns and room allocations of the small groups need to be flexibly determined up to the last minute, or when many such groups can usefully be conducted without need for face-to-face contact. (For a feasibility study of this application see : Anthony Judge, Computer conferencing as a means of enhancing communication at a large conference / festival, Brussels, UIA, 1977, 20p.)

There should be no illusions about the difficulties of obtaining the full benefit from this technique. One article (page 436) reports on the legislative and regulatory problems which will be crea­ted by the PTT administrations unfamili­ar with or resistant to it. There are still political problems to be solved in the establishment of the European On-line information Network (EURONET) and the compromises made will not neces­sarily facilitate computer conferencing particularly in those countries which tend to inhibit person-to-person contact and group formation. Meanwhile multi­national enterprises are rapidly expan­ding their own US-based data networks and services. We are about to witness a subtle battle between those offering access to data bases via networks, with all the political and economic implica­tions of dependency incurred by ac­ceptance of any one of them. There are problems of data base monopolies and data network cartels, information is power and undoubtedly many intel­ligence agencies will wish to monitor data links as an extension of their fo­cus on telephone calls. It may even be that the full potential of this person-to-person technique will be made available only in some countries or only within specialized conference centres, think-tanks, or other elite institutions. The considerable advantage it gives to such places will rapidly become obvious. On the other hand, computer conferen­cing could really constitute the much needed major breakthrough in interna­tional and transnational action. It crea­tes a unique " communication environ­nant "which facilitates all aspects of organization and meeting activity, whilst giving greater precision to what­ever controls and structuring are felt by participants to be really necessary. An individual or group with many interests is freed to interact, virtually simultane­ously, with many different networks, rather than being restricted by the need for attention to only one of them. It is the ideal technique to by-pass inter-group and intra-institutional communi­cation blockages.

It may well be that conventional orga­nizations will be unable to respond ap propriately to this opportunity because of the perceived threat to their tradi tional structures. (One should lor example, evaluate carefully precisely what new kinds of exchanges, if any were permitted during the Unesco ex­periment in " tele-conferencing "re­ported on page 423). But new groups, and coalitions of transnational groups' may well take to this non-directive tech­nique " like a duck takes to water "it is not difficult to foresee the possibili­ty that alternative communities around the country (and across continents) will shortly link themselves through many such computer conferences into a rich and active network whose cha­racteristics and potential are already beginning to emerge.

Already, for example, the London Fes­tival for Mind and Body (100.000 parti­cipants) is investigating its use for 1978, and the Humanity Foundation is planning its use during a satellite link­up between simultaneous meetings in Los Angeles, Toronto and London of 3,500 persons each. If the value of the technique is satisfactorily demonstrated by such grass-roots initiatives, a new era in transnational communications will be launched and a further ques­tion mark may be placed over organi­zations and meetings as currently struc­tured.

Whilst conventionally structured bodies will of course continue to exist (and may even permit themselves minimal use of this technique), we may witness wide­spread transnational interaction of people and groups through a multipli­city of computer " conferences "whose number, interconnected ness, and sub­ject matter change constantly in a be­wildering variety of configurations in rapid response to the issues and in­sights of the day. The majority of such conferences will have no need to make use of a conventionally structured or­ganization base -- they will have bro­ken free of the territorial requirement. Whether such conferences are " or­ganizations "or " meetings > or neit­her is an academic question -- it is through them that the majority of trans­national action is likely to occur in the future. 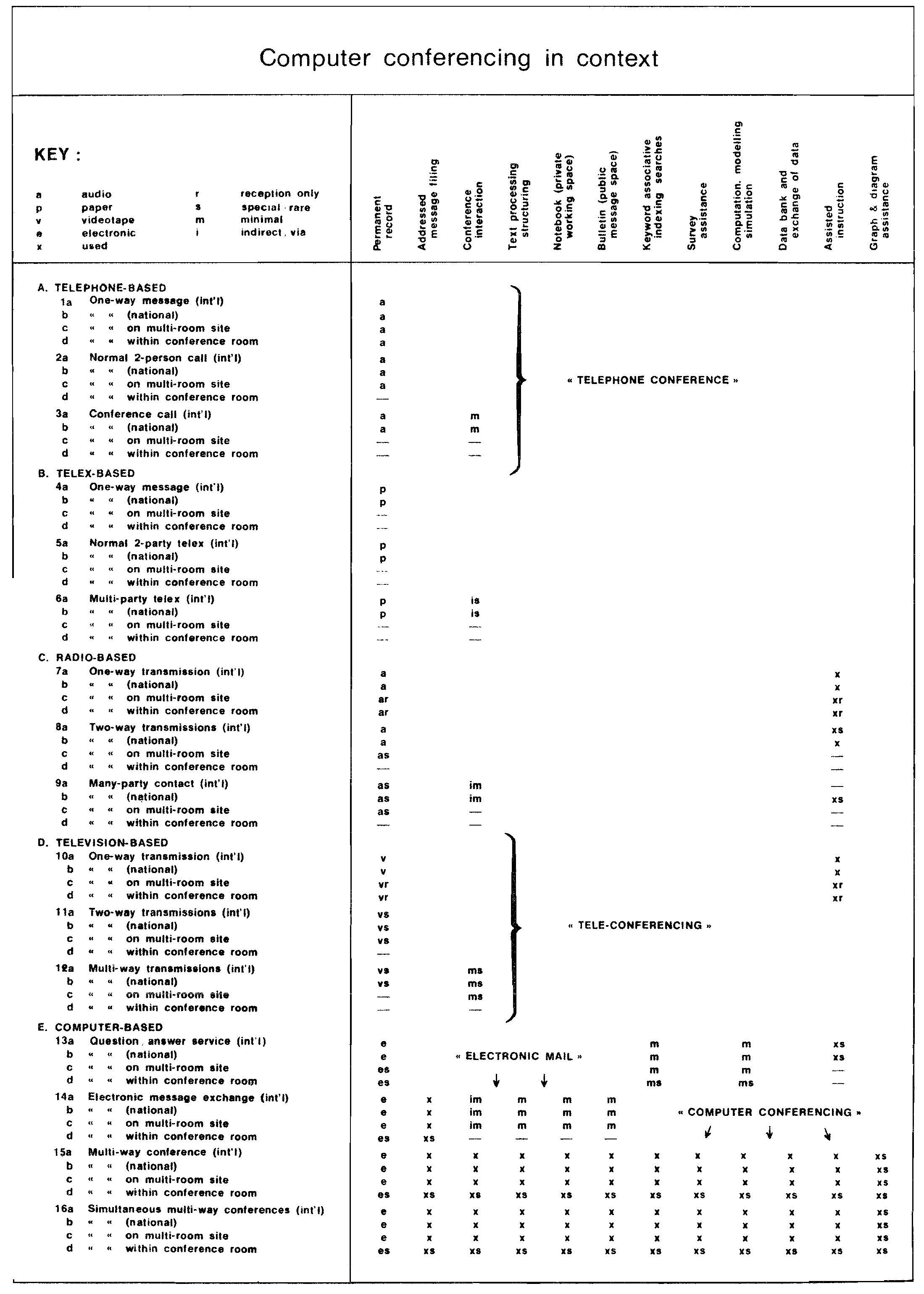