You are currently in UIA's online document archive. These pages are no longer maintained. To search the full archive click here.

The editors of International Associations are grateful to Bokforlaget Corona AB for their kind permission to reproduce the images on the following pages and particularly for permission to modify the text to apply to organizations rather than to human beings, as in the book.

Adapted from a French version, and applied to networks, by A.J.N. Judge.

The problem of increasing societal variety is described.

Sections of this Article (accessed via the links on the right)

Tags:
From Networking to Tensegrity Organization

with contributions from A.J.N. Judge

Both social science literature and practical experience show that networking benefits the organizations themselves and advances their common goals. This paper will be dealing with Inter-Organizational Networks (know as IONs), their functioning and operations and the special characteristics of this style of cooperation (1).

Principles essential to widespread response to world crises. Prepared for the planning meeting of the Planetary Initiative for the World We Choose (Stony Point. January 1981)

When a decision is made to pursue a group of concerns, there is a basic problem of ensuring that they are appropriately interrelated and do not simply constitute a fragmented collection of initiatives. This paper examines a new approach to the systematic recognition of the interrelationships necessary to the emergence of a viable configuration of concerns at a new level of significance.

Organizations have traditionally been based on some more or less explicit notion of hierarchy. This paper is not concerned with varieties of alternative organization which may be obtained by tinkering with the hierarchical formula and introducing participative forms of decision-making, worker management, etc. The intention is to look beyond hierarchy (1). A recently much-favoured approach is that of networks and 'networking' which has now been quite extensively described and practised (2, 3, 4, 5, 6, 7) as a contrast to hierarchical activity. 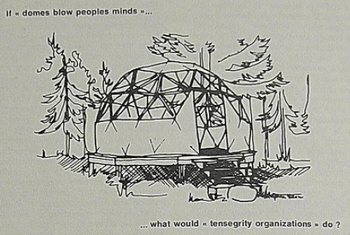 Those who have handled models of tensegrity structures (discussed in Part 1 of this article, pages 248-257) are tantalised by their relative indestructibility despite their apparently extreme fragility - they seem to have some as yet hidden significance. The principles have only been used so far to build geodesic domes, whether large or small (13), although they are important to design for space missions (14).

It is characteristic of society today that any area of thought, belief or action is viewed in a dualistic manner, either positively or negatively. Much of the dynamic of society is determined by interaction, competition or conflict between those holding such polarised perspectives on any issue. The structures currently available reflect this situation by either: