The Encyclopedia of World Problems and Human Potential

This project is currently available as an open source online publication. You can view it at the link below:

The Encyclopedia of World Problems and Human Potential is a unique, experimental research work of the Union of International Associations. It is currently published as a searchable online platform with profiles of world problems, action strategies, and human values that are interlinked in novel and innovative ways. These connections are based on a range of relationships such as broader and narrower scope, aggravation, relatedness and more. By concentrating on these links and relationships, the Encyclopedia is uniquely positioned to bring focus to the complex and expansive sphere of global issues and their interconnected nature.

The initial content for the Encyclopedia was seeded from UIA’s Yearbook of International Organizations. UIA’s decades of collected data on the enormous variety of association life provided a broad initial perspective on the myriad problems of humanity. Recognizing that international associations are generally confronting world problems and developing action strategies based on particular values, the initial content was based on the descriptions, aims, titles and profiles of international associations. 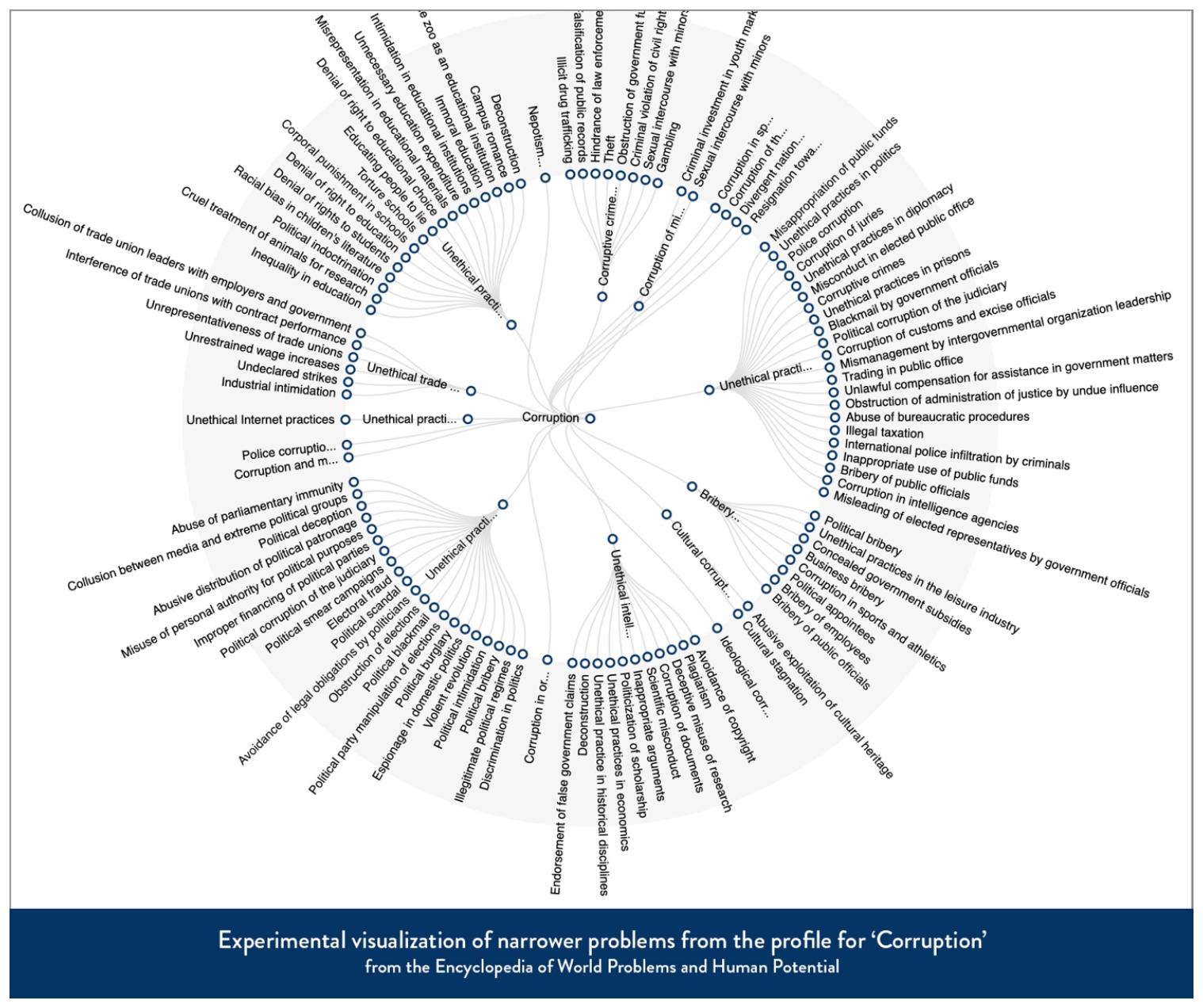 This long-term project was initiated in 1972 as a collaboration between the UIA and the foundation Mankind 2000. At the time it was judged to be an "impossible project", but the first work based on this research was published in 1976 under the title Yearbook of World Problems and Human Potential.

Prior to this collaboration, the UIA had activities, starting before 1939, which illustrate its long-term interest in relation to the Encyclopedia project. These include the publication Annuaire de la Vie Internationale (1908-09 & 1910-11) which included information on problems with which international organizations were concerned at that time. Also published was a Code des Voeux Internationaux; codification générale des voeux et résolutions des organismes internationaux (1923) which listed those portions of the texts of international organization resolutions that covered substantive matters, including what are now regarded as world problems and what amount to plans or strategies for their solution.

In 1916, Paul Otlet, the co-founder of the UIA, also produced a book entitled Les Problèmes Internationaux et la Guerre which identified many problems giving rise to and caused by war. In 1935 he attempted a synthesis, Monde: essaie d'universalisme -- connaissance du monde; sentiment du monde; action organisée et plan du monde, which touched upon many problems and their solutions within a society in transformation. The preface bore the title The Problem of Problems, a topic he had first explored in 1918.

After the initial publication in 1976, the Encyclopedia was published in two further independent print editions in 1991 and 1995, as an interactive CD-rom in the late 1990s and is now an open-source website and public data API.

It is tempting to assume that a full cataloging of world problems and strategies is an impossible task. The Encyclopedia operates in a constant state of change and improvement, and should be considered experimental and perpetually incomplete. As the work of international associations evolves, the content in the Encyclopedia continues to expand. UIA is currently developing ways in which the data can be both populated and utilized by the associations world and researchers at large.

The Encyclopedia is available as a free, open-source public resource. It contains profiles of some 56.000+ world problems, 31.000+ action strategies, 3200+ Human Value profiles and more. You can visit the website and explore the content at the link below:

The print edition of the Encyclopedia of World Problems and Human Potential is the result of an ambitious effort to collect and present information on the problems humanity is confronted with, as well as the challenges such problems pose to concept formation, values and development strategies. With a total of nearly 20,000 entries, linked by over 158,000 cross-references, this edition is more comprehensive than any of the previous editions. Entries themselves have been rigorously updated and extended in both quantity and content.